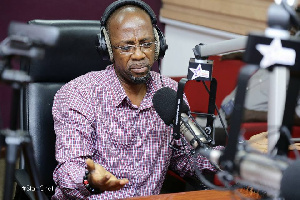 The slapdash royalty system in the country has kept everybody on the edge – www.entertainmentgh.com!

Chairman of the Ghana Music Rights Organisation, Rex Omar has responded to Akoo Nana, describing him as an “ignoramus” who is craving for attention – www.ghanaweb.com.

According to Rex Omar, Akoo Nana is a frustrated, uncivilised villager who does not know anything about GHAMRO or the workings of the organization.

In a video sighted by GhanaWeb, Rex Omar denied the accusations leveled against him by the ‘Shody’ singer, and said GHAMRO has been duly audited by the Attorney General and that they always disburse royalties to musicians who have assigned their rights to the organisation.

A visibly angry Rex Omar said Akoo Nana is not even a member of GHAMRO, but all he does is sit on the internet and spew rubbish because data is cheap and can be afforded by such people.

He said he (Rex Omar) is a serious man, and doesn’t have time for people like Akoo Nana, whose only job is to slander people.

“This is a frustrated guy who is looking for attention. If it wasn’t for this nonsense would you be even calling me this morning and showing it on your television? Who is Akoo Nana? He did the same thing to Obour. So what is he trying to say? This is an ignoramus, uncivilized villager who thinks he can just spew any rubbish,” he said.

In a video posted on his Instagram, Akoo Nana said the Board Chairman of the Ghana Music Rights Organization (GHAMRO) had no moral right to disrespect the president on radio.

NO DOUBT! Shatta Wale Is A Certified Local Champion

GHANA IS HARD! So Much Needs On A Daily, Shatta’s Songs Go Unnoticed