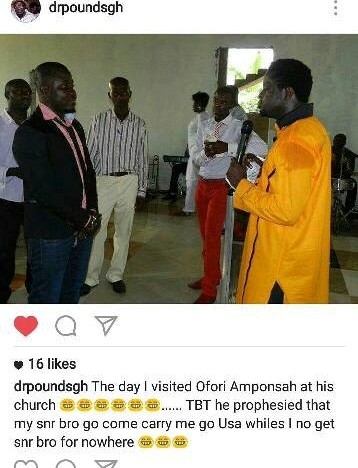 12-time VGMA-winning artist, Ofori Amponsah, is not being allowed to catch a break; fans, critics and industry folks have been on his case from the time he made the decision to leave highlife to become a Pastor and his infamous decision to comeback to do ‘secular’ music.

After a year or so of his comeback, some fellows still make references to his time as a ‘Man of God’ – from entertainment journalists to radio/TV presenters in their various interviews – www.entertainmentgh.com has noted.

It is quite interesting, yet, funny as to why Hitz FM presenter, Dr. Pounds, would put the singer on ‘blast’ for a prophesy he received from the then Man of God.

On his instagram page, Dr.Pounds posted a photograph of his meeting with the singer in his church some years ago;

“The day I visited Ofori Amponsah at his church, he prophesied that my snr bro go come carry me go USA,while  no get snr bro for nowhere.” 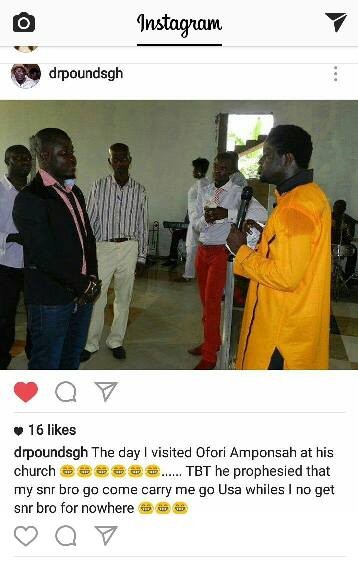 Observers are questioning the timing and motive for the post; wondering why the presenter would make such a revelation at this time.

Ofori Amponsah is already out with a new single,’Tintin’ ft Samini and is said to be working with the likes of Kwabena Kwabena for his next album.

I love my body, it is a museum of beauty - Efya

PROBLEM SOLVER! Zylofon Arts Fund Is The Answer To Lack Of Funding In Our Industry – Socrate Sarfo