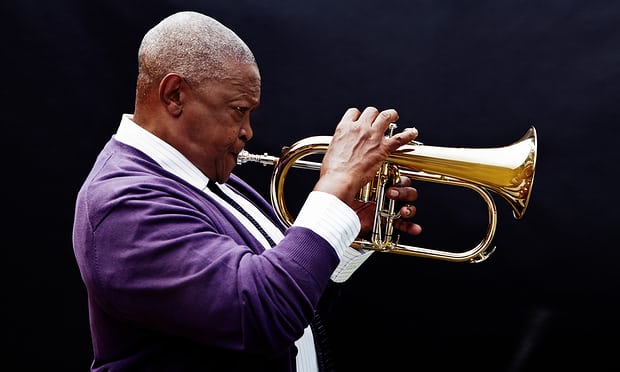 A statement from the trumpeter’s family said that Masekela “passed peacefully” in Johannesburg, where he lived and worked for much of his life.

“A loving father, brother, grandfather and friend, our hearts beat with a profound loss. Hugh’s global and activist contribution to and participation in the areas of music, theatre and the arts in general is contained in the minds and memories of millions across six continents,” the statement read.

Masekela had been suffering from prostrate cancer for almost a decade. He last performed in 2010 in Johannesburg when he gave two concerts which were seen as an “epitaph” to his long career.

South African social media was immediately flooded with tributes to “brother Hugh”, whose career and work was closely intertwined with the troubled politics of his homeland.

Masekela was born in Witbank, a mining town in eastern South Africa, and was given his first trumpet by the anti-apartheid activist Archbishop Trevor Huddleston, who formed a pioneering jazz band in Soweto in the 1950s that became a launch pad for many of South Africa’s most famous jazz musicians.

Masekela went on to study in the UK and the US, where he had significant success. In 1976 he composed Soweto Blues in response to the uprising in the vast township.

The man who became known as the father of South African jazz played and toured with major stars such as Paul Simon but continued his political engagement, writing Bring Him Back Home (Nelson Mandela) in 1987. The song became an anthem of the anti-apartheid struggle.

He also performed at the opening ceremony of the 2010 World Cup in Johannesburg.

South Africa’s arts and culture minister Nathi Mthethwa described Masekela as “one of the great architects of Afro-Jazz”. “A baobab tree has fallen, the nation has lost a one of a kind musician,”

Documentary on 2012 Election Petition Set To Premiere On January 24

LAUGH AT SHOW? I Will Never Sit On Delay Show – Okraku-Mantey

SHOW UP OR SHUT UP! MUSIGA Tells Ambolley To Back Accusations With Facts