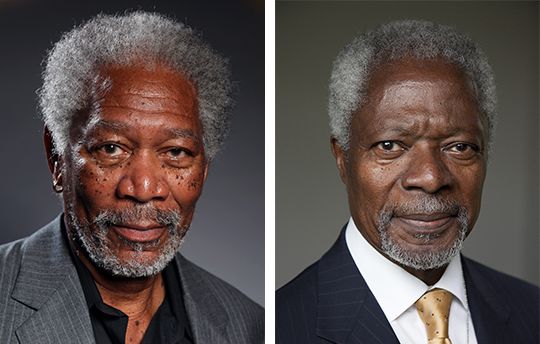 With the passing of former United Nations Secretary-General Kofi Annan, stories of his kindness and good humour have come through with the many condolences.

One such story involves Annan being mistaken for actor, Morgan Freeman while vacationing in Italy.

Annan was looking for a respite from public life after leaving the U.N. at the end of 2006. He stayed at a friend’s hideaway, off the grid ― no TV, radio or newspapers.

A few weeks into their vacation, he and his wife went into town to buy a newspaper. A group of men in a shop appeared to recognize him and rushed “Morgan Freeman, may I have an autograph?” one man said. Annan reportedly smiled, graciously signed “Morgan Freeman” with the man’s pen, and returned to his sabbatical.

Annan died early Saturday in Switzerland at the age of 80. Annan felt his anonymity had been ruined.

VIDEO: I Lived With 3 Snakes At Home – Diabolo Man

VGMA@20: Oragnisers Fail To Announce ‘Artiste of the Year’ Due To Shatta, Stonebwoy Fight

WHO CARES? Ebony is still reigning VGMA Artiste of the Year – Father

Afia Schwarzenegger Has Presidential Ambition! One Of The Reasons She Quit Smoking

HOW TRUE? My Talent Would Have Been Limited If I Did Gospel Music – eShun