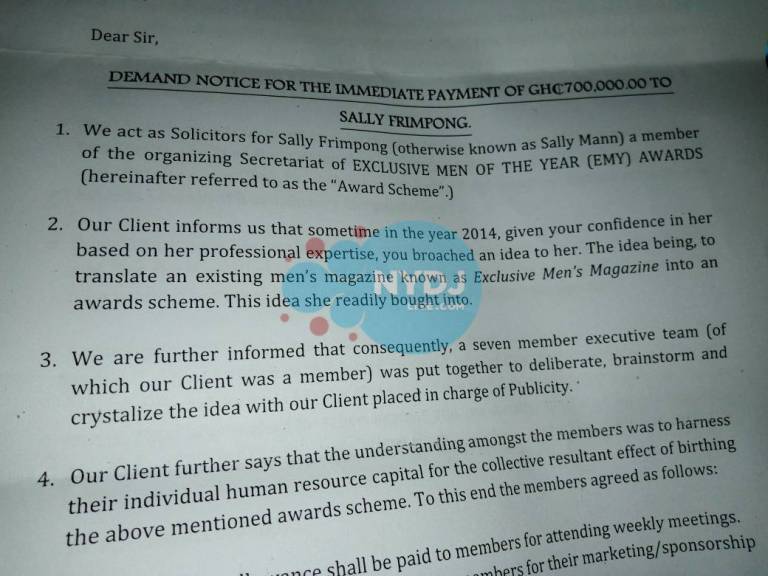 With a little over a week to this year’s Exclusive Men of The year Awards (EMY), organisers of the awards have been hit with a Demand Notice asking them to pay an amount of GHC700,000.

According to the demand notice sighted by Ghana’s Hub For Pop Culture And Urban Entertainment – www.nydjlive.com, the organisers are requested to pay Sally Frimpong (otherwise known as Sally Mann) an of GHC700,000.

This, we gather is an accumulated figure dating back to as far as 2014 when then maiden edition of the awards event was held. The figure includes several years of dedicated service, unpaid allowances, commission and fees entitled to Sally Frimpong.

Find below a transcription of the documents obtained by Ghana’s Hub For Pop Culture And Urban Entertainment – www.nydjlive.com.

“Dear Sir,
DEMAND NOTICE FOR THE IMMEDIATE PAYMENT OF GHC70o.000.00 TO SALLY FR1MPONG.

1. We act as Solicitors for Sally Frimpong (otherwise known as Sally Mann) a member of the organizing Secretariat of EXCLUSIVE MEN OF THE YEAR (EMY) AWARDS (hereinafter referred to as the “Award Scheme”.)

2. Our Client informs us that sometime in the year 2014, given your confidence in her based on her professional expertise, you broached an idea to her. The idea being, an translate an existing men’s magazine known as Exclusive Men’s Magazine into awards scheme. This idea she readily bought into.

3. We are further informed that consequently, a seven omdeemlibbeerraetxeecburtai team (of which our Client was a member) was put t.ogetheernt storm and crystalize the idea with our Client placed in charge of Publicity.

4. Our Client further says that the understanding amongst the members was to harness their individual human resource capital for the collective resultant effect of birthing the above mentioned awards scheme.To this end the members agreed as follows

5. In addition our Client says that her vision and believe in crystalizing this concept motivated her to make personal visits and presentations to over forty companies to seek sponsorship, most of whom have now become household names associated with the Awards Scheme. That her ingenuity, professional competence and industry knowledge contributed significantly to the successful staging and execution of the first edition of the EMY’S AWARDS ceremony in 2015, and subsequent ones in 2016 and 2017.

6. Our Client informs us that having contributed immensely to develop the structures of the Awards Scheme for it to become what it is today, you, together Clement Kwakye, Publisher of Exclusive Men’s Magazine have successfully frozen her out from any of the benefits she is entitled to. Furthermore none of the agreed terms as per paragraph 4 has been fulfilled over the years.

7. Our Client instructs us to inform you that haven been frozen out of the activities of the Secretariat, she is of the opinion that her professional expertise is no longer needed and therefore is willing to walk away amicably from anything connected with the Awards Scheme at a satisfactory compensation.

8. Our client values her professional expertise, all the unpaid allowances, commission and fees she is entitled to, as well as her shareholding in the Awards Scheme over the four years of her involvement from 2014-2018 to be GHC700,000.

Check the documents from below. 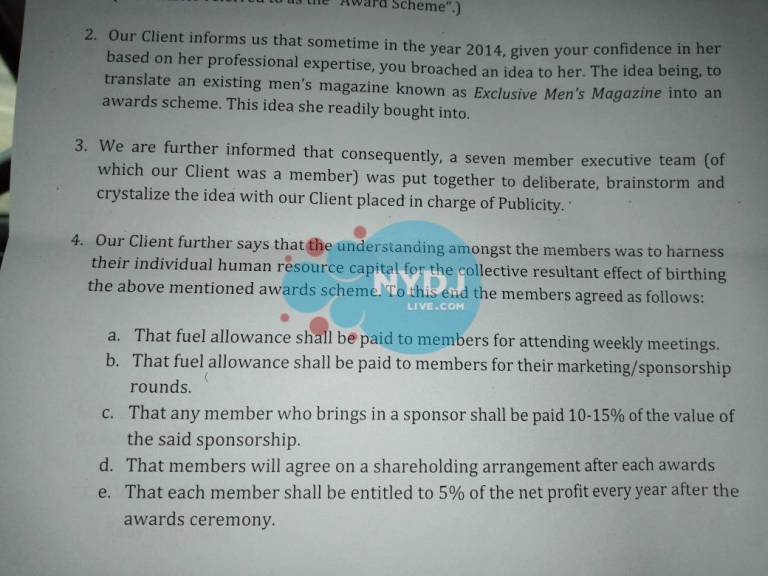 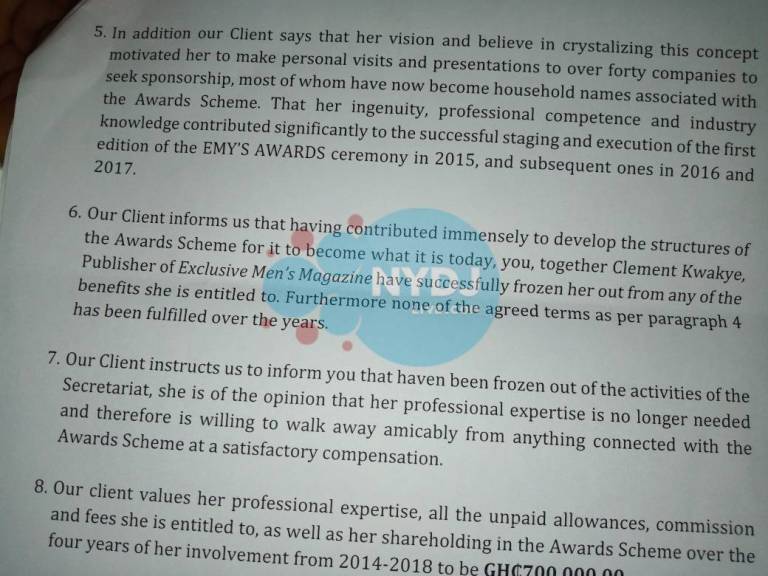 The Exclusive Men of The year Awards (EMY) is a prestigious annual fathers day related event that celebrates men and fathers of steel and zeal, whose passion and dedication has rolled out major landmarks in the development and progress of our families, societies and the nation at large; Dignitaries, Businessmen, entertainers, sportsmen, social workers, journalists, administrators, philanthropists, mentors, and so on.

WAIT FOR IT! Kuame Eugene Urges Fans To Expect Something Massive With Davido

SMART OR SOMETHING ELSE? All My Controversies Are For Cash – Shatta Wale

AND SO WHAT? Criss Waddle Shuts A Fan By Bragging About How He Controls Money

BACK IN THE BIN! R.Kelly Arrested Again Over Child Support

I AM SINGLE! Criss Waddle Isn’t My Boo- Yvonne Okoro Clears The Air

SHE IS RIGHT! I have inspired so many female musicians – Efya