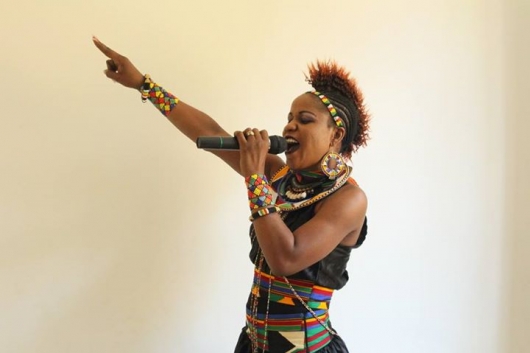 The marriage of multiple award-winning Ghanaian Soul musician, Sherifa Gunu is the latest to suffer celebrity relationships scandal after the ‘Kelewele’ hitmaker sadly announced her marital status as being single.

Sherifa Gunu,got married to Ikechukwu Sunday,a Nigerian in 2014 and has two children with him.

The celebrated musician who once described her marriage as the craziest thing she did for love in an interview with DJ Premier On Accra 100.5FM,hinted that she has been divorced for a while and apologized to her fans for keeping it under wraps.

“Sorry to my fans, maybe some of you might be heart broken because a lot of things is going on.I’m no more married… I have kept it for a long time but for somethings, there is no need, you have to move on.”Sherifa Gunu said as monitored by Razzonline.com.

Sherifa, who did not disclose what caused her divorce with Ikechukwu Sunday emphasized that,” I got divorced because God knows best in everything. I believe in miracles, I believe in destiny, I believe I’m a strong person and I have moved on.”

The mother of two admitted that her divorce has affected her children but added that her faith in God will see them through.

“I have my beautiful children around me and they are growing well, God is taking care of us, we are perfect. Yes it has affected them for sometime but if you have faith, you will believe that everything happens for a reason, especially people like me, anything that happens, God is still king.” She noted.

Sherifa Gunu is currently out with her newest single track titled ‘Kelewele’ which is really enjoying massive airplay.

Kindly watch excerpts of the interview below!

HE WAS DIFFICULT! Joey B Reveals Why He Left D-Black’s Record Label

RELAX,BRO! Mr. Drew Says He Is Picking VGMA New Artiste of the Year

WHO NEEDS PRAYE REUNION? Choirmaster to perform in Australia