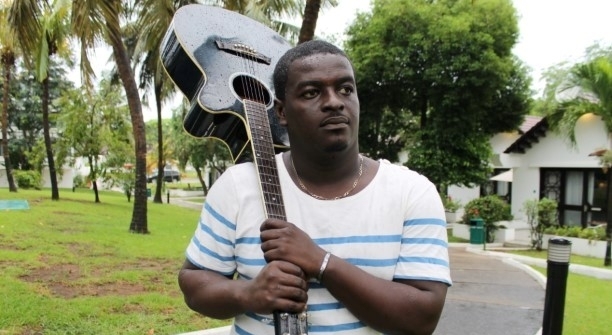 Slip Music recording artiste, Kumis Guitar labored for nationwide popularity for his song and name all year long but within the spate of a week, the young enterprising and talented highlife artiste has attained all that popularity and more.

After the official nominations list for the 2014 Ghana Music Awards was released, the name Kumi Guitar has been trending on every platform, making him the most-talked-about personality in the last few days.

Music lovers, critics and some stakeholders have all descended heavily on members of the VGMA Board for the inclusion of Kumi Guitar in the category of ‘New Artiste of the Year’ and his label head and manager, Mark Okraku Mantey, who is also a staunch member of the Board, has also not been spared in what many purport to be collusion on the Board to favour his artiste.

Reacting to Kumi’s inclusion in the ‘New Artiste of the Year’ category and all the ensuing confusion, Chairman of the VGMA Board, Nii Ayite Hammond, stated that there is no mistake in handing the artiste a nod in that category. According to him, per the information that was available to the Board, Kumi had only featured in a compilation album that was released some years ago where the song was not credited to him.

Mr. Hammond reiterated that, if any person(s) have information contrary to what the Board used, the fellow should present it for review. After the review, if the Board ascertains that the artiste is not a new artiste, he will be dropped from the category.

On whether the Board amended the category definition for ‘New Artiste of the Year’ this year, an assertion being proclaimed by Mark Okraku Mantey; the Board Chairman stated that there have been no changes to definitions for all categories including the one in contention. He confirmed that the idea of altering the definition was mooted for discussion but no action was taken on it and the old definitions were adhered to.

Commenting on the Mark’s declaration on several platforms about the changes that were effected to the definition, Nii retorted that, he feels the Slip Music CEO might have had a wrong impression on what transpired during the Board discussions on the subject.

In a related interview with Gideon Darko aka Sugartone of A-Mac Studios, he brazenly told the paper, “Kumi’s song is for me. I created and produced the song and only made him to sing it. I made the compilation album and placed the song on it.”

Will Nii Ayite Hammond’s revelation silence all the naysayers who consider Kumi Guitar ineligible to vie for the ‘New Artiste of the Year’ category? Will Sugartone’s claim of ownership of the song make Kumi eligible for the awards? We wait to see!

Artistes In Ghana Are Disrespectful

LISTEN HERE: Wendy Shay Asks Us To “Kut It” In Her New Jam

I Will Beat My Artiste If… – Bulldog