The Obamas hosted their final state dinner at the White House Tuesday night, and they’re going out with a bang.

“Today is bittersweet for Michelle and I because this marks the final official visit and state dinner of my presidency. But it’s OK. We saved the best for last,” the president said ahead of the dinner.

The first lady wore a custom-made gown designed especially for her by Donatella Versace, according to Versace. The dress is a fitted, floor-length, rose gold chainmail gown with delicate draping details and an asymmetrical off-the-shoulder neckline. 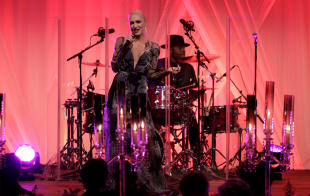 President Obama was caught making small talk with the Italian prime minister as they entered the White House, recounting what he told the first lady tonight.

“Nobody cares about what we wear,” he said. “All they’re looking at is you.”

The first lady’s Italian counterpart wore a gown by Florentine designer Ermanno Scervino, according to the Italian press.

When Your Best Actor Becomes A ‘Pastor’

Kim Kardashian To Take a Break

SETTLING THIS! Mr Ibu Reacts To Reports He Had One Night Stand With A Fan

Kanye Is god: ‘Yeezianity’ Is The New Religion