By now, fans and critics alike have had ample time to fully digest JAY-Z’s 13th studio album, 4:44, which came loaded with a hefty number of subliminal disses and a few more direct shots.

Here’s how they’ve all responded (so far).

JAY-Z started a whole new hashtag with his lines about Halle Berry’s ex-husband Eric Benét who famously cheated on his then wife. On “Kill Jay Z,” Hov warns to “never go Eric Benét” and lose the “baddest girl in the world.”

Benét clearly caught wind of it the day the album dropped and tweeted, “Hey yo #Jayz! Just so ya know, I got the baddest girl in the world as my wife….like right now!”

Hey yo #Jayz! Just so ya know, I got the baddest girl in the world as my wife….like right now! ✌🏾

“Kill Jay Z” featured a not-so-subliminal shot aimed at Future — about his ex Ciara and her new husband Russell Wilson being stepfather to Future’s son. Future later took to Snapchat, with what was considered by many as a response of his own. On “The Story Of O.J.”, JAY raps, “Y’all on the ‘gram holdin’ money to your ear / There’s a disconnect, we don’t call that money over here.” Future posted an image of himself with money to his ear with the caption, “U ain’t got the juice like dat. MOOD”

Though he wasn’t named specifically on 4:44, apparently after Boosie Badazz heard “The Story Of O.J.,” he felt inclined to post a nearly 10-minute video to defend his braggadocious actions on the Gram. Much like Future, the same line caught his attention: “Y’all on the Gram holdin’ money to your ear/ There’s a disconnect, we don’t call that money over here,” JAY spits.

Although he claims JAY is “not a god” to him, he ends the video by saying how much he’d love to work with him one day. “I’d love to do a record with you too but your words don’t move me, homie,” he said.

Owner of The Source and Prince’s estate lawyer Londell McMillan got name checked on “Caught Their Eyes.” JAY-Z essentially calls McMillan out for only seeing Prince as a source of revenue. Prince, who passed away in April 2016, had been entangled in a lawsuit with Warner Bros. throughout the ’90s, which prompted him to change his name to a symbol and write “slave” across his face. Since his death, there have been disputes over who will inherit his estate.

“I sat down with Prince, eye to eye/ He told me his wishes before he died / Now, Londell McMillan, he must be color blind/ They only see green from them purple eyes / This guy had ‘slave’ on his face/ You think he wanted the masters with his masters?/ You greedy bastards sold tickets to walk through his house/ I’m surprised you ain’t auction off the casket.”

McMillan responded by talking about his relationship to the late music icon. He told Billboard: “I like the beat, but I wonder who he thinks helped Prince to take ‘slave’ off of his face. It was a homie Jay Z grew up with in the same neighborhood, Londell McMillan.”

He also tweeted on the day 4:44 came out, “Yes, I heard the track! Not focusing on a diss track now. Focused on not letting WBR control masters. I do like the beat. #Emancipation2.”

Yes, I heard the track! Not focusing on a diss track now. Focused on not letting WBR control masters. I do like the beat. #Emancipation2

Beyoncé’s sister Solange is reportedly thrilled her brother-in-law owned up to his past indiscretions and apologized to his wife. He mentions the “Cranes In The Sky” singer on the song “Kill Jay Z,” along with the infamous elevator fight caught on CCTV. “You egged Solange on/ Knowin’ all along/ All you had to say you was wrong,” he spits.

According to a source close to Solange who spoke to Hollywood Life, “Solange isn’t angry anymore and accepts that Jay has changed and loves how he has manned up and has become the man that her sister deserves.”

Tell Jay Z we still taking selfies…but I’m taking care of business down here too! W/ @YazzTheGreatest in btwn sessions at #EssenceFest2017 pic.twitter.com/8QZy3PY2FP

Rev. Al Sharpton was quick to respond to JAY’s reference to him on “Family Feud,” the sole track to feature Beyoncé. “Y’all whole pass is in danger, 10 Mississippi/ Al Sharpton in the mirror takin’ selfies/ How is him or Bill Cosby s’posed to help me?,” Hov asks.

New York rapper 50 Cent is going all out to make sure everyone tunes into “Power” later today. The hip-hop veteran has playfully trolled JAY-Z‘s new 4:44 album to secure some bonus promo. 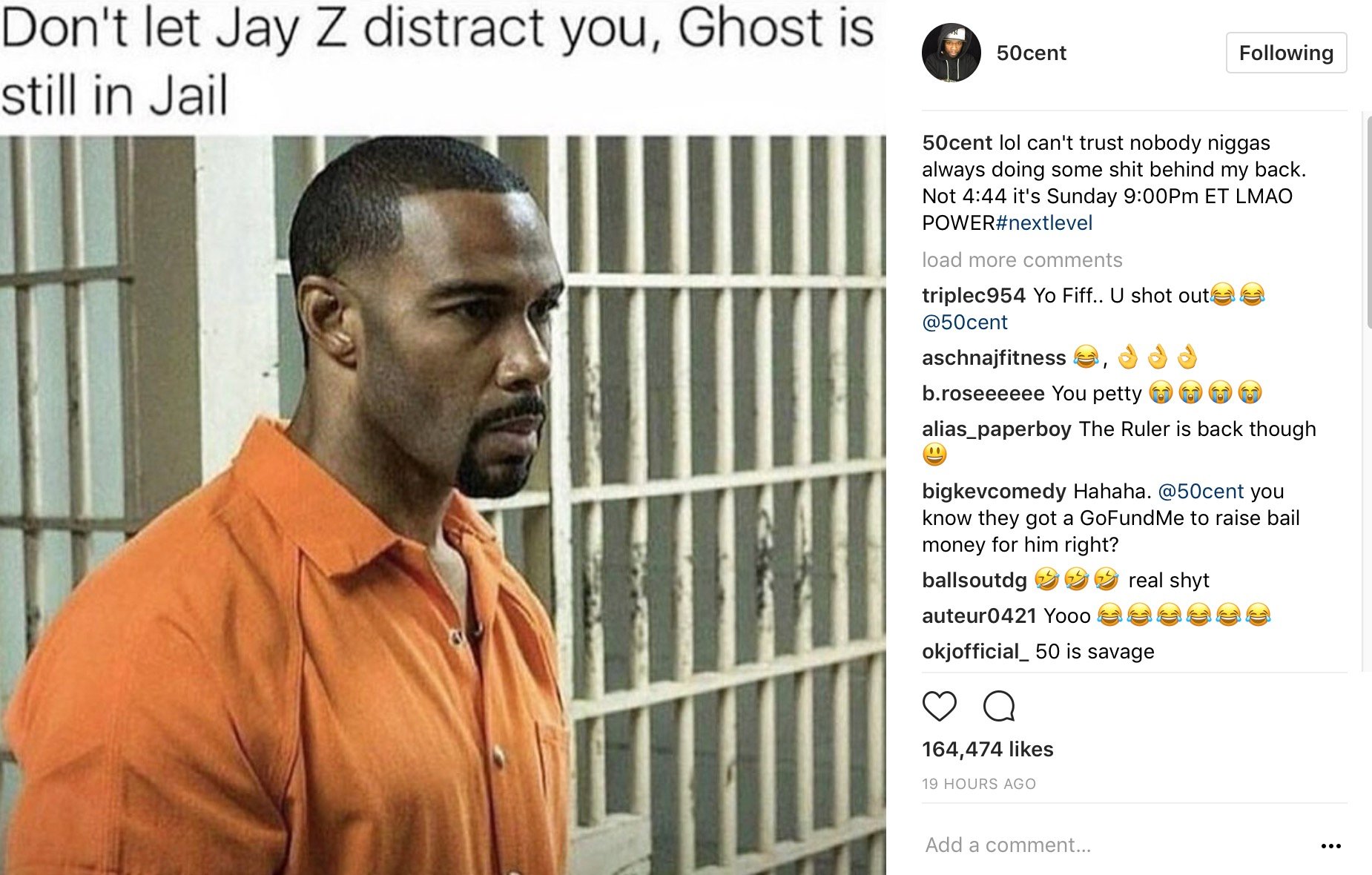 OVERLY DELAYED! Kanye West’s “Jesus Is King” No Longer Has A Release Date