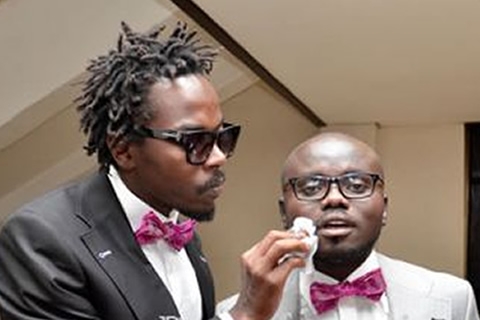 Controversial musician, Kwaw Kese popularly known as ‘Abodam’ who broke down in tears after the news of the death of his manager, Fennec Okyere says he will miss him.

Fennec Okyere was shot dead by some unknown assailant(s) Thursday morning at his Manet Gardens residence on the Spintex Road, Accra.

Kwaw Kese, who saw his manager’s lifeless body lying in a pool of blood, broke down in tears and was inconsolable for several hours.

He took to micro blogging site, Twitter Thursday afternoon to tweet that he will miss Fennec, who he described as a “brother and best friend.”

“RIP FENNEC OKYERE. YOU WERE A MANAGER, BROTHER AND MY BEST FRIEND. GOD KEEP YOU IN HIS HOLY PLACE. I WILL MISS YOU” Kwaw Kese tweeted.

Panji Anoff, CEO of Pidgin Music has described Fennec Okyere as one of the smartest people his outfit had ever trained and employed.

In a post on Facebook, Panji said: Fennec Okyere RIP. One of the smartest people Pidgen Music has ever trained/employed, your stellar progression thru life was always a great source of pride for us all… You excelled wherever you went… I am so glad I saw you not too long ago… Ghaddafia is still waiting for “Unco Fenneh” to come back back and buy her plenty of yogurt… please Return if Possible…”

Rapper Sarkodie tweeted: “What kind of hatred will make u kill ur fellow human being ? May GOD have mercy on all of us … smh aaoh FENNEC ! hmm aoh”

The body of the late manager has been deposited at the Korle-bu Teaching Hospital morgue.

4×4 ‘AMANEHUO’! I Can’t Carry The Group Like Plantain Chips For Sale – Captain Planet

POOH, PIII,PEWW! When The Vag**a Makes Noise During S*x. Is It Normal?

BIG BREAK! DKB Billed For BasketMouth’s ‘The Lords of the Ribs’ In UK