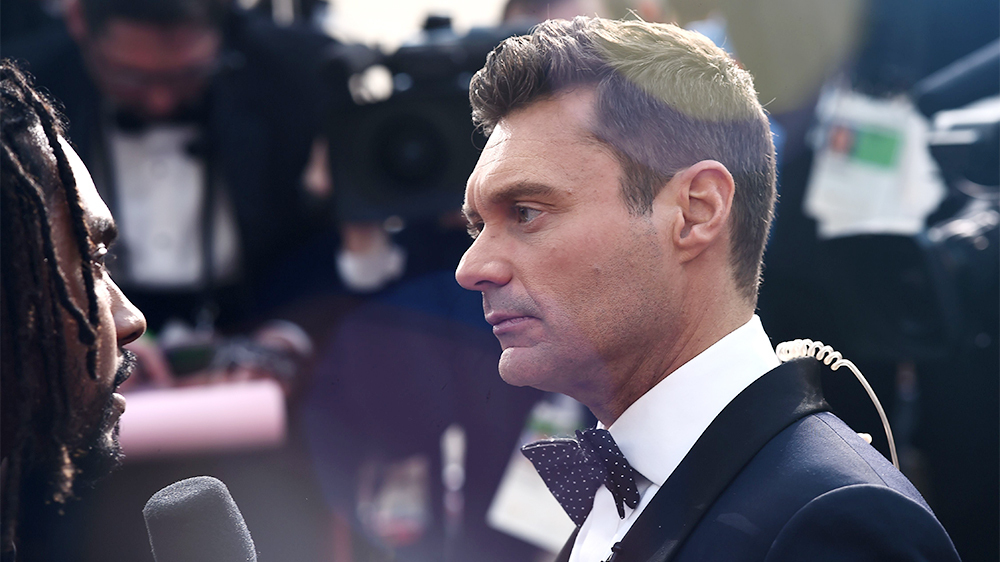 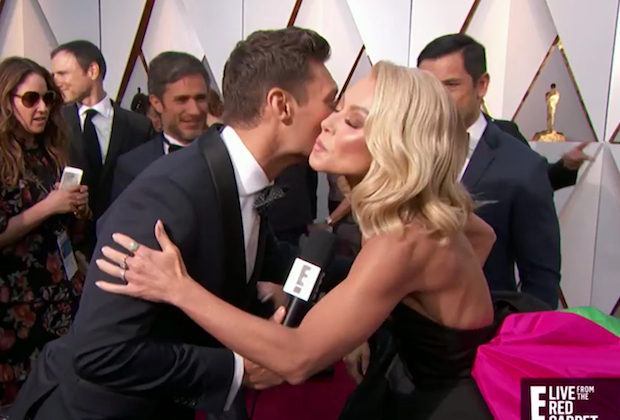 The Golden Globes red carpet — which featured women dressed in pro–Time’s Up all-black and actresses calling out E! for its gender inequities on live television — was the first post-Weinstein pre-awards-show affair, and supposedly announced a new way of doing glam-cam business. Speaking up, particularly about the issues affecting women, was in, and draping a veil over them was out. If you were an optimistic person, or maybe even if you weren’t, the red carpet shows and the Globes ceremony that followed suggested the climate in Hollywood could be going through a sea change in front of our eyes.

The red-carpet shows that preceded Sunday night’s Academy Awards, putting a period at the end of this activism-oriented awards season, brought things back down to Earth.

Some stars and publicists had said in advance of Oscar night that they would avoid E! host Ryan Seacrest on the red carpet in light of allegations that he engaged in longtime sexual harassment of his former stylist. That seems to be what happened during Sunday night’s broadcast. I don’t know with any certainty that Seacrest is guilty of the charges. He has continued to deny them and E! has closed its investigation into the matter, even though a recent Variety story made a strong case for the accuser’s version of events. What I do know is that E! should not have made Seacrest its primary point person during its Oscar pre-show because it completely sucked the life out of the program and made the show look wildly out of step with the times. Then again, maybe its mani-cam sensibility had already signaled long ago that its coverage, not to mention status quo TV red-carpet coverage in general, is out of step with the times. 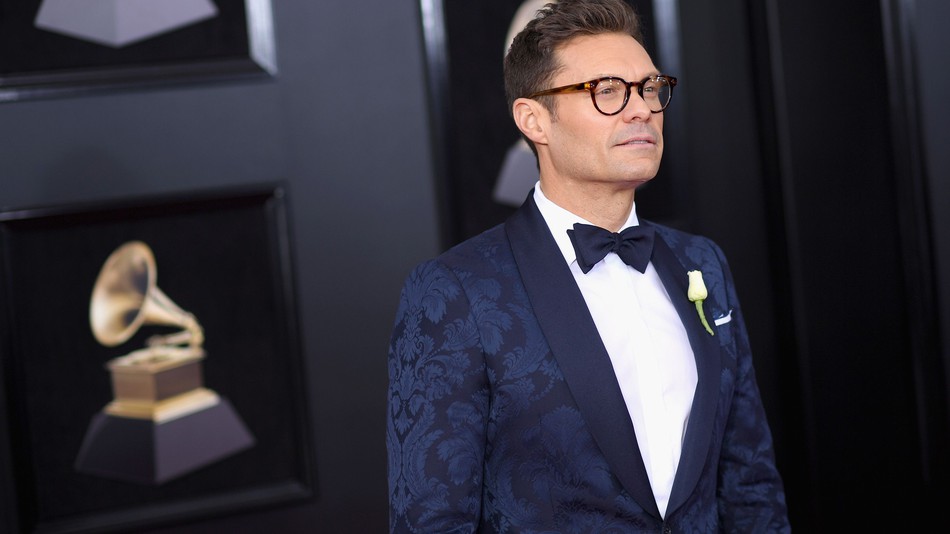 It’s not like no one stopped by to talk to Seacrest, the biggest multi-tasker in showbiz. A number of folks whose roots lie on the music side of things — Mary J. Blige, Common, and Diane Warren, among others — all did. So did some legends (Rita Moreno, Donald Sutherland), some nominees (Richard Jenkins, several members of the Get Out ensemble), and the Official Most Fun Celebrity of 2017 and 2018, too, probably, Tiffany Haddish. But for the first hour of the program and much of its second, E! threw to co-host Giuliana Rancic — who was stationed at the Roosevelt Hotel and frequently joined by E! commentator Kristin Dos Santos and MTV’s Josh Horowitz — far more often than it focused the camera on Seacrest. During what felt like a particularly desperate PR move, Seacrest’s Live With Kelly and Ryan co-host Kelly Ripa and her husband, Mark Consuelos, swung by to say hi and trade air kisses.

The dearth of big movie stars on E! became that much more apparent when ABC’s show got underway at 6:30 Eastern and quickly launched into interviews with Jordan Peele, Chadwick Boseman, as well as Salma Hayek, Ashley Judd, and Mira Sorvino, victims of Harvey Weinstein’s abuse who spoke directly about the Time’s Up movement. 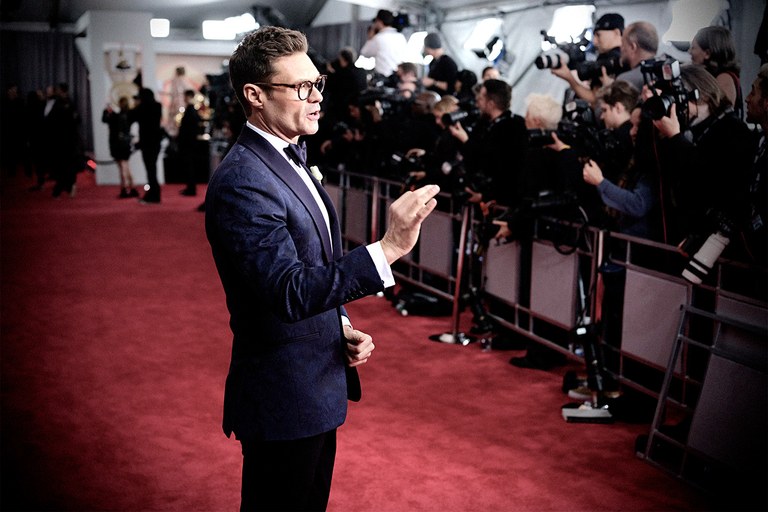 The words Time’s Up were barely spoken on E!, and that appeared to be a decision made out of necessity once E! decided to keep  Seacrest on the show. Dos Santos mentioned the movement once, by my count, and also made a strong statement about the need for the industry to employ more women filmmakers. “We’re not there yet. But we’ve got to keep pushing and change will come,” she said. At which point Rancic praised her for speaking so eloquently on this subject, then followed that with “Now back to Ryan on the red carpet.” Which was sort of like watching a person applaud Martin Luther King Jr.’s “I Have a Dream” speech, then go: “Now back to you in the studio, Richard Spencer.”

Before you destroy my Twitter mentions, please know that I realize Ryan Seacrest is not a neo-Nazi. I’m exaggerating to make a point here. And that point is that the underlying hypocrisy of the whole E! exercise highlights an undeniable truth about Hollywood: that it’s very good at paying lip service to progressive ideas, but doesn’t necessarily take action when the stakes are high. In a way, actually, this year’s Live From the Red Carpet show was the most honest E! has ever been because every minute was a subtextual admission of that truth.

The higher-ups at E! were admittedly in a tough position. If they took Seacrest off the air or even decided to merely have him swap positions with Rancic — which would have made an enormous amount of sense — it might have sent a signal that the top brass believe he is guilty, which they have already said they don’t. The best thing would have been for Seacrest to voluntarily step out of the picture this year, although again, perhaps in his mind that would have meant admitting he did the things he has been accused of doing when he insists he did not. But once he realized that publicists may be reticent to have their clients speak to him, he could easily have said, “I didn’t do the things that I’ve been accused of, but I also firmly stand by women and want to make sure that as many of them as possible feel comfortable speaking on-camera this year, which is why I am ceding the floor this one time to my very capable colleague, Giuliana Rancic.” Maybe some people would have assumed he was guilty, but guess what? Some people are doing that anyway. The gesture would have seemed classy and also would have saved E!’s red-carpet show from looking like a train that, if not quite going off the rails, was definitely wobbling along with a lack of VIPs onboard. (Also, I’d like to add that this guy has, at minimum, 15 jobs. It would hardly put him on welfare if he gave up a fraction of one temporarily.)

In addition to what this all says about how E! is handling the allegations against Seacrest, this whole situation also underlines the need to start thinking about these red-carpet shows from new angles. For some reason, E! — not to mention broadcast networks like ABC or NBC, which presides over the prologue to the Golden Globes — have been handling these celeb parades the same way year after year without ever rethinking their approach. Granted, it is challenging to do a structural overhaul on a red-carpet show. People essentially watch them because they want to see what famous people have to say and what they’re wearing. Chatty Q&As are always going to be at the core of how they work. But there has to be a way to handle them with more intelligence, self-deprecation, humor, and finesse than what we typically see, not just on E! but on most of the shows that do the “What are you wearing?” routine.

Kathy Griffin — who was actually pretty refreshing on the E! red carpet until her joke about a young Dakota Fanning being in rehab got her fired — recently wrote a column for Time on this very subject. “This country is going through a phase where people want to hear funny stuff,” she wrote. “We want to hear encouraging stuff. And we want to hear something a little bit deeper. Activism is no longer just for Jane Fonda and Martin Sheen: We’re all activists now. And the red carpet needs to embrace it instead of fighting it.”

Granted, Griffin may just be advocating to score such a gig for herself. But she makes a great point. It shouldn’t so hard to find people who know how to dance the sort of delicate dance Griffin is describing here.

The whole point of Time’s Up and #OscarsSoWhite is to shine a light on the need to break away from business as usual in the entertainment industry and let fresh voices be heard. Those movements have become so big that the red-carpet hosts can’t ignore them without looking out of touch. But on Sunday night, it became clear that these shows, as silly as they are, also can’t ignore them in terms of how they themselves operate. The whole Seacrest debacle is a reminder of many things, including this: that it really is time to start seeing some new people holding the microphones and engaging with the stars on Oscars night.

WE ARE STILL IN COURT! Defamation Suit Against Shatta Wale Not Abandoned - Charterhouse

FOOD ON HER TABLE! Wiyaala To Perform at Commonwealth Games 2018 In Australia

UNDER ATTACK? Nigerians Unhappy With Desmond Elliot For Commissioning Public Toilet In His Constituency

THESE CELEBS! Cardi B & Offset No More Together